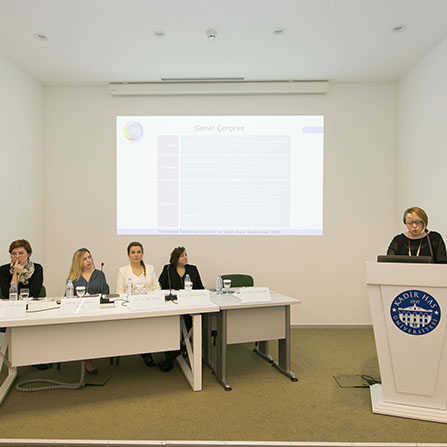 Kadir Has University announced the results of its second Perceptions of Gender and Women in Turkey research. According to results the primary problem of women in Turkey is still violence. It is also interesting that in many topics women have more negative views compared to men.

Results from the research conducted for the second time by the Kadir Has University Gender and Women’s Studies Research Center were announced at a press conference held at the University’s Cibali Campus on March 4th, 2016, Friday.

Data gathered from 1200 people in 26 districts was shared by Rector Prof. Dr. Mustafa Aydın and the research team. The results underline that 77.8% of respondents said that the most important problem of women in Turkey is violence, which is lower than in 2015 (88,6%).

Research results reveal that 45.5% of couples meet through family members, but 36.1% reported that the decision to get married was theirs. 33.6% reported having an arranged marriage.  Among those with an arranged marriage, the age difference was decided.  For those under age 25 it was far less common than for those over age 35.

WHERE ARE FATHER WHO CARE FOR CHILDREN?

Another topic investigated by the research was the extent to which fathers participate in childcare.  While respondents stated that overall fathers did not regularly contribute to childcare, the activity they engaged in most was “going out together” (37.5%), the activity with the least engagement was “changing diapers” (4.7%).  Another thought provoking result is that 26.4% of fathers reported that they never played with their children.

DOMESTIC VIOLENCE IS ENOUGH TO GET A DIVORCE

One of the most striking results came under the topic “domestic violence”. While 63.3% of  participants overall agreed that domestic violence is enough reason for divorce, for women it was 67.4% while just 59.2% of men agreed. On the same topic the question whether violence is acceptable in some cases for men to keep the family together was asked.  Overall just 14.4% agreed with this statement but it is interesting that 11.8% of women were positive about the statement and 17 % of men responded positively.

Three quarters of all participants agreed that underage children should not be able to marry, under any circumstances.  At the same time 86.4% of participants think that it is quite common for women under 18 to get married. According to the participants it is inappropriate for children under age 15 to work outside the house. Girls are seen as suitable for domestic work, but boys are generally not.

WOMEN ARE NOT MENTIONED IN THE WORKPLACE

The topic “Work life and Women” revealed a number of negative outcomes for women. 64.8% of the women participating in the research state that they are currently unemployed and 70.2% have never worked. Interestingly 72.2% of women say “No” to the question “Would you like to work?”. The answers to the question “What kind of opportunities should be provided for you to work?” were as follows: 47.9% father/husband/family permission, 41.5% education, 27.9% a safe working environment. 35.3% of women are positive about “Women should not work without their husbands’ permission” and 73.7% agreed that physical harassment is enough reason for one to be fired. The same figure for men is 71%, while 73.8% of women and 70.3% of men considered verbal harassment a reason to be fired.

Abortion has been a hot topic recently. According to the research 78.9% of participants agree that abortion should be a decision couples make together. 56.9% of them think that “our health system makes securing an abortion difficult, while 43.6% said “abortion is a basic right, cannot be banned”.

HOW WELL ARE WOMEN REPRESENTED IN PARLIAMENT?

NO RIGHTS FOR LGBT!

Another major finding of the survey was that participants have a negative attitude regarding questions about LGBT (Lesbian, Gay, Bisexual and Trans individuals) rights. 33.4% responded positively to the statement “Gay, lesbian and trans individuals must have equal rights,”, whereas the expression “Women and men can have same sex relations,” garnered only 17.5% support among the participants. Furthermore, 53% of the participants responded that homosexual relations are contrary to Turkish social values, and only 25% of the respondents agreed with the statement “It is acceptable for couples with no intention to marry to live together.” 58.6 % of the participants regard marriage as a precondition of having a child together.

The results of the survey showed that EU (European Union) membership and candidacy are no longer a source of hope for progress concerning women’s rights in Turkey. 41.6 % of the participants agreed with the statement “If Turkey were not a candidate for EU membership the women rights in the country would have gotten even worse.” This was the only statement in the section on the EU that received a higher score than the 2015 survey. On the other hand, it is striking that the number of participants who support the idea that EU membership would jeopardize the domestic role of women, has more than doubled. The rate of respondents who agreed with that statement rose from 12.5 % in 2015 to 26.8 % in 2016.

The results of Perceptions of Gender and Women in Turkey Research