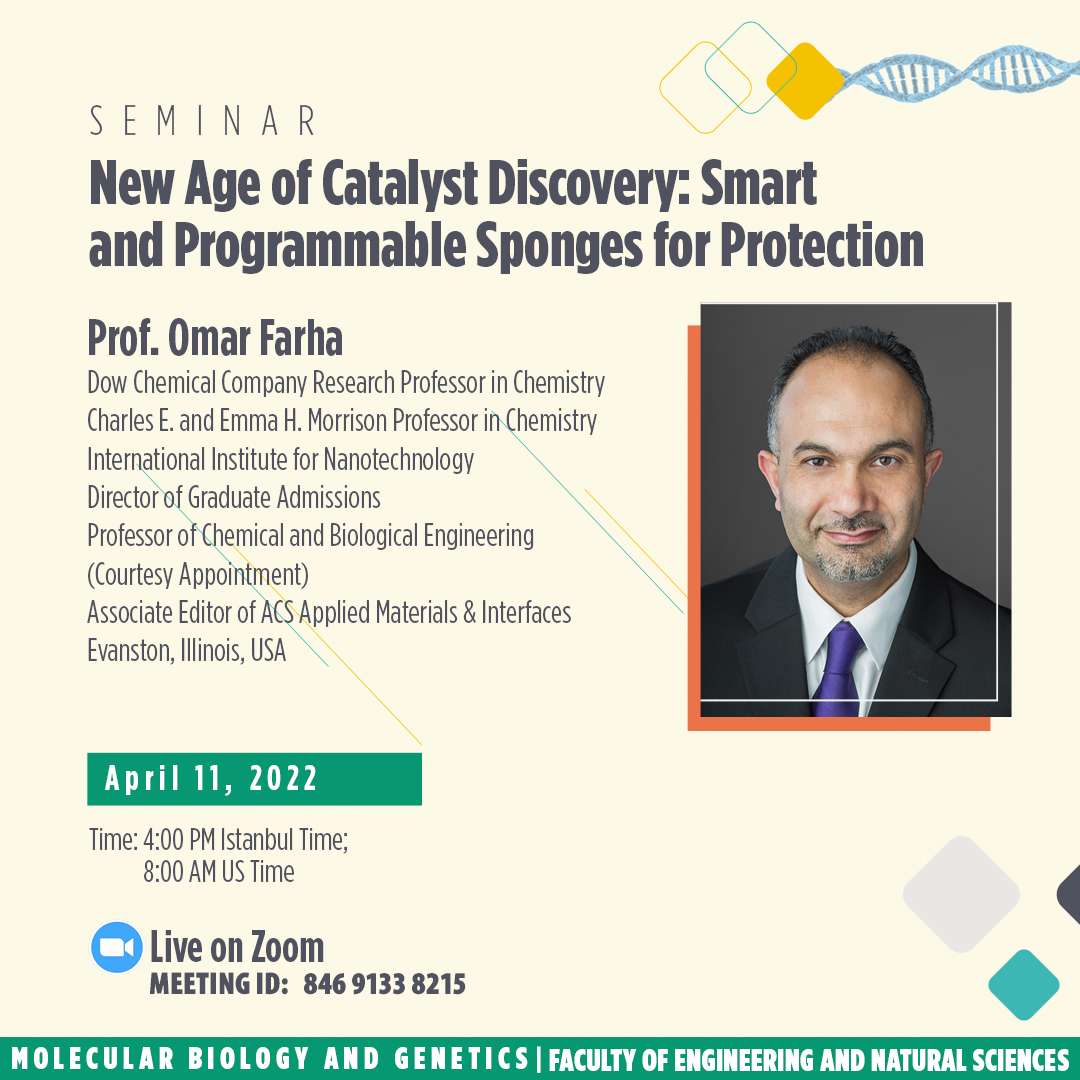 Özet: This talk will focus on metal–organic frameworks (MOFs) from basic research to implementation and commercialization. MOFs are a class of porous, crystalline materials composed of metal-based nodes and organic ligands that self-assemble into multi-dimensional lattices. In contrast to conventional porous materials such as zeolites and activated carbon, an abundantly diverse set of molecular building blocks allows for the realization of MOFs with a broad range of properties. We have developed an extensive understanding of how the physical architecture and chemical properties of MOFs affect material performance in applications such as catalytic activity for chemical warfare agent detoxification.

Konuşmacı Hakkında: Omar K. Farha is the Dow Chemical Company Professor and Charles E. and Emma H. Morrison Professor in Chemistry at Northwestern University and an Associate Editor for ACS Applied Materials & Interfaces. His current research spans diverse areas of chemistry and materials science ranging from energy to defense-related challenges. Specifically, his research focuses on the rational design of metal-organic frameworks (MOFs) for applications sensing, catalysis, storage, separations, and water purification. His research accomplishments have been recognized by several awards and honors including a fellow of the European Academy of Sciences, a Fellow of the Academy of Arab Scientists, Kuwait Prize, Japanese Society of Coordination Chemistry “International award for creative work”, the Royal Society of Chemistry “Environment, Sustainability and Energy Division Early Career” Award, the American Chemical Society “The Satinder Ahuja Award for Young Investigators in Separation Science” and “ACS ENFL Emerging Researcher Award”, and an award established by the Department of Chemistry at Northwestern University in his honor: the Omar Farha Award for Research Leadership “awarded for stewardship, cooperation and leadership in the finest pursuit of research in chemistry” and given annually to an outstanding research scientist working in the department. Prof. Farha has more than 550 peer-reviewed publications, holds 16 patents, 74,000 citation and h-index of 132 (google Scholar), and has been named a “Highly Cited Researcher” from 2014 to 2021. Prof. Farha is the co-founder and president of NuMat Technologies, the first company to commercialized an engineered system-level product enabled by Metal-Organic Framework Materials.