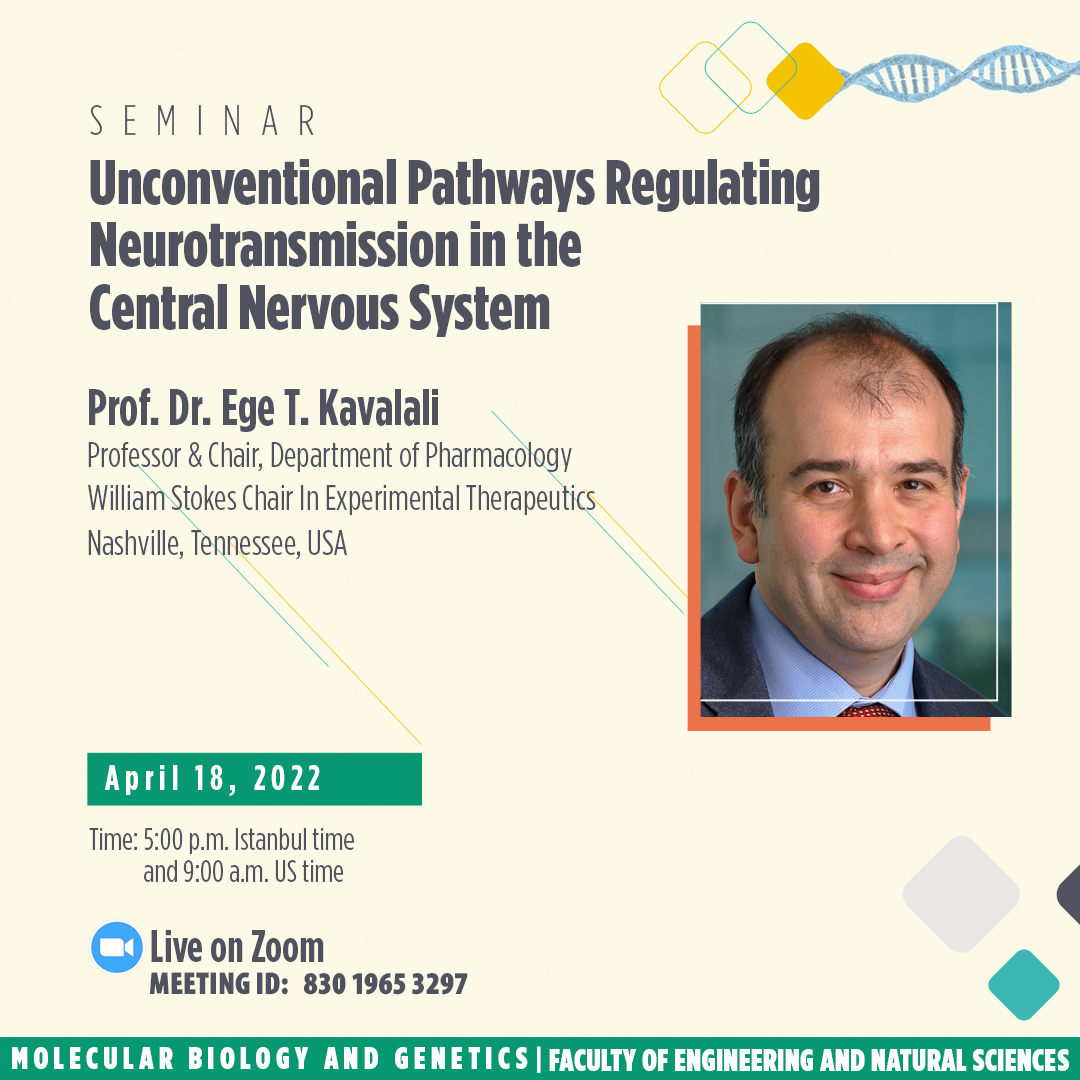 Özet: Spontaneous neurotransmitter release was initially thought to be an accidental side product of action-potential–evoked transmission following its discovery by Bernard Katz in the middle of the 20th century. In a series of investigations our group has demonstrated that spontaneous neurotransmission involves distinct presynaptic as well as postsynaptic substrates and represents a previously overlooked mode of neuronal communication. In this presentation, I will discuss our recent insight into regulation of this unconventional mode of neurotransmission by various signaling pathways that include endoplasmic reticulum stress and exchange of synaptic vesicle proteins via extracellular vesicles.

Konuşmacı Hakkında: As an undergraduate Dr. Kavalali studied Electrical Engineering at Bogazici University in Istanbul, Turkey.  In 1995, he received his Ph.D. degree in Biomedical Engineering from Rutgers University, New Brunswick, New Jersey.  In 1999, he completed his postdoctoral studies at Stanford University (Stanford, California) in the Department of Molecular and Cellular Physiology.  The same year, Dr. Kavalali joined the faculty at the Center for Basic Neuroscience at UT Southwestern Medical Center in Dallas, Texas.  After 19 years of service at UT Southwestern, in September 2018, Dr. Kavalali joined the Department of Pharmacology at Vanderbilt University (Nashville, Tennessee) as a Professor. He currently serves as the Chair of the Department and holds the William Stokes Chair in Experimental Therapeutics. Dr. Kavalali studies mechanisms of neurotransmission and synaptic signaling in the central nervous system using electrical and optical recording techniques as well as molecular tools. His group focuses on the molecular basis and functional consequences of heterogeneity among synaptic vesicle recycling pathways present within individual synapses. In particular, his work has uncovered the role and underlying mechanisms of spontaneous neurotransmitter release that holds it apart mechanistically and functionally from evoked neurotransmission. These studies gave rise to the hypothesis that spontaneous neurotransmission acts as an autonomous neuronal signaling pathway independent of action potential-evoked synaptic transmission. In addition, Dr. Kavalali and colleagues have identified spontaneous neurotransmission-dependent signal transduction mechanisms that are required to trigger rapid antidepressant action.