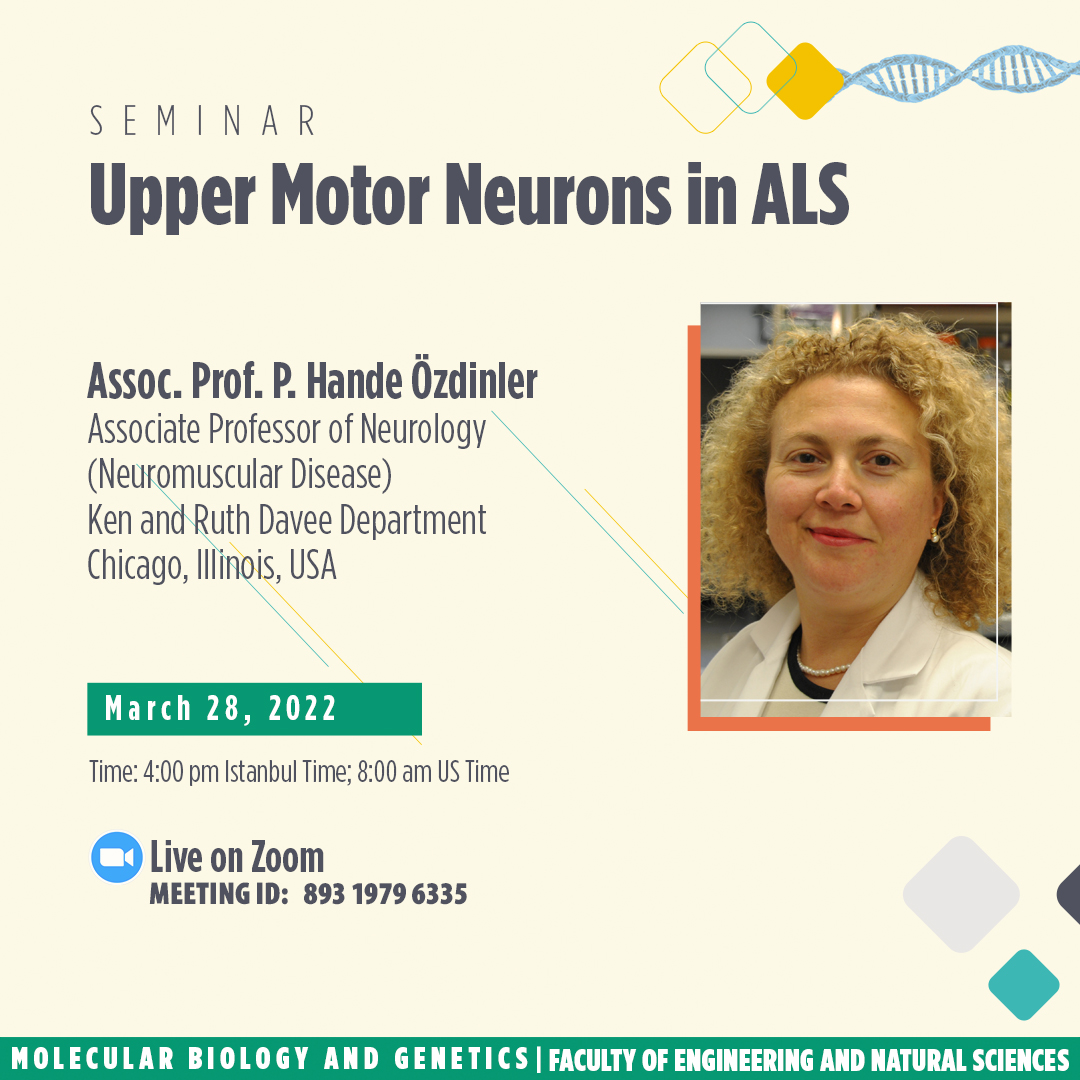 Abstract: ALS is a disease that results in muscle weakness when motor neurons in the brain and spinal cord die. This disease affects not only the physical condition of the person but their emotional or mental state as well. The disease may arise from a different mechanism in each patient, and the drug to be used may vary depending on which mechanism the disease is associated with. Dr. Ozdinler and her team at Northwestern's ALS Research Center conduct research under the headings of why neurons in the brain die and whether it is possible to revive them. The team conducted a study that allows to see the motor neurons in the brain by isolating them with the "fluorescence" method for the first time in the world, with which they would help to investigate the cellular mechanisms and genetic causes of death of neurons with a very high accuracy rate.

About the Speaker: Assoc. Prof. Hande Ozdinler is an Academician, Associate Professor of Medicine, and Inventor. She is the founding President of the ALS Research Laboratory at Northwestern University in Chicago (USA). After graduating from the Department of Molecular Biology at Boğaziçi University (1994), she did her master's degree in Genetic Biotechnology at Boğaziçi. She was awarded with the best master's thesis award from Boğaziçi University with her thesis, and then she went to the U.S. for her doctorate. Dr. Ozdinler received her PhD from Louisiana State University. After completing her PhD in Cell Biology, Anatomy and Neuroscience (1996), she started working as a researcher at Harvard Medical School Neurosurgery, and received the Harvard Center for Nervous System Repair Award. She was also the first Turkish female scientist to be awarded by the Harvard Nervous System Repair Center. While working as a researcher at Harvard, Northwestern University (NU) offered an appointment for Dr. Ozdinler to lead the ALS Research Center. She accepted the offer and started working as the head of the research center at NU. The Ozdinler Lab is interested in understanding the cellular and molecular mechanisms responsible for early vulnerability and progressive degeneration of upper motor neurons.  These neuron populations are clinically relevant as their degeneration leads to diseases such as HSP, PLS and when their degeneration together with spinal motor neurons, leads to ALS. Ozdinler Lab also works towards building effective treatment strategies, developing drug discovery platform that incorporates upper motor neurons, and identification of biomarkers and early detection markers. Dr. Ozdinler has received many awards that can be listed as but not limited to INVO N.XT Award for Drug Discovery, Northwestern University (2017); One of 10 Most Innovative Research of 2015, International Innovation (2016); and Top 30 Most Influential Turkish American Women in USA, Turk of America (2016). As a member of ANA and SFN, she is also the editorial board member of Clinical and Translational Neuroscience.