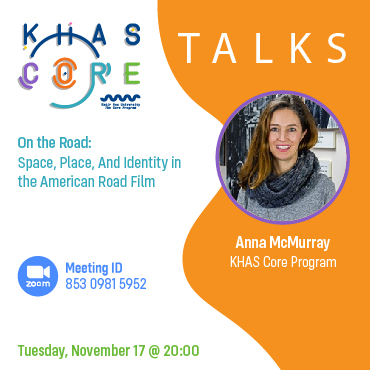 In this lecture, I examine the defining features of the American road film, tracing its traditions from the beginning of the genre to more modern road films. I discuss how the genre questions notions of space, place, and identity in its overall critique of American society, as well as how physical movement in such films functions as a metaphor for both literal and symbolic journeys. Defined by its narrative and mise-en-scene, the road film often destabilizes the traditional sense of “home,” either by situating it in many different places/spaces or by overturning the concept altogether. In my discussion of how the road film uses such spaces to critique national and personal identities, I review the iconography and archetypes of the genre by placing them within a cultural and historical context. I also discuss some common themes and trajectories of the road film, such as how “the road” gives impetus to escape and internal transformation. Some of the questions posed in this lecture include: What characterizes the protagonist of a typical road film? Whose “road” is it? Why do characters in such films “hit the road” in the first place? And where does the road ultimately lead? Examples of road film sub-genres covered in the lecture include the “outlaw couple” road film, the “buddy” road film, and the queer road film.