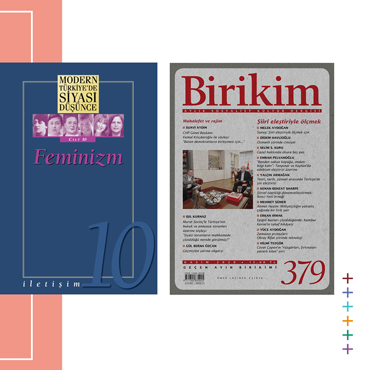 New articles published by two of Kadir Has University Directorate of Core Program faculty members, Dr. Yüce Aydoğan and Dr. Zeynep Kutluata, are now available for interested readers. Dr. Yüce Aydoğan's article on the relationship of Oktay Rifat's poetry with technology was published in Birikim journal, whereas Dr. Zeynep Kutluata's article reviewing the reflections of the Balkan Wars and the First World War on the discourses about women's rights in the Ottoman Empire was included as a book chapter in "Feminism", a book published by İletişim Yayınları (Publishing House).

In her article titled “Zamanın Protezleri: Oktay Rifat Şiirinde Teknoloji (Prosthetics of Time: Technology in Oktay Rıfat Poetry)”, Dr. Yüce Aydoğan examines the primary existence of technology in Oktay Rifat's poetry, in terms of its connection with temporality, which we can call as "prosthetic", as well as its primary share in the movement of internal differentiation of nature/existence. Dr. Aydoğan argues that Oktay Rifat's poetry, particularly since the 1960s, points out that technology prioritizes everything, the whole economy of life and meaning, and that this requires the possibility prerequisite; he further claims that Oktay Rifat’s poetry is a technological poem, repeats and performs the movement of technology. Rifat assumes a high-level technology question even when he deals with the simplest and modest theme, such as some pastoral/shepherd themes that might be thought to be positioned far from technological culture. Dr. Aydoğan’ın Oktay Rifat’s article reviewing Oktay Rifat's poetry is available in the November 2020 Issue of Birikim journal.

Dr. Zeynep Kutluata, in her article titled ''Reflections of Balkan Wars and First World War on Discourse(s) about Women's Rights in the Ottoman Empire'', examines the discourse established by the Muslim/Turkish women's movement in the Ottoman Empire throughout the war and points out that the movement incorporates a highly militaristic and nationalist discourse. Emphasizing that this discourse is in contradiction with the militarist and nationalist policies to the extent that it conflicts with the patriarchal policies of the period, Dr. Kutluata continues her words as follows: “The discourses differ from the (Turkish) nationalist masculine/male-oriented discourse of the period, which invited women to participate in the war process by instrumentalizing them in a modernist, militarist, nationalist and patriarchal framework where they claim their rights for women on behalf of women. In this context, it can be said they represent an intermediate layer within the (Turkish) nationalism of the period.” Dr. Kutluata’s article is published by İletişim Yayınları.