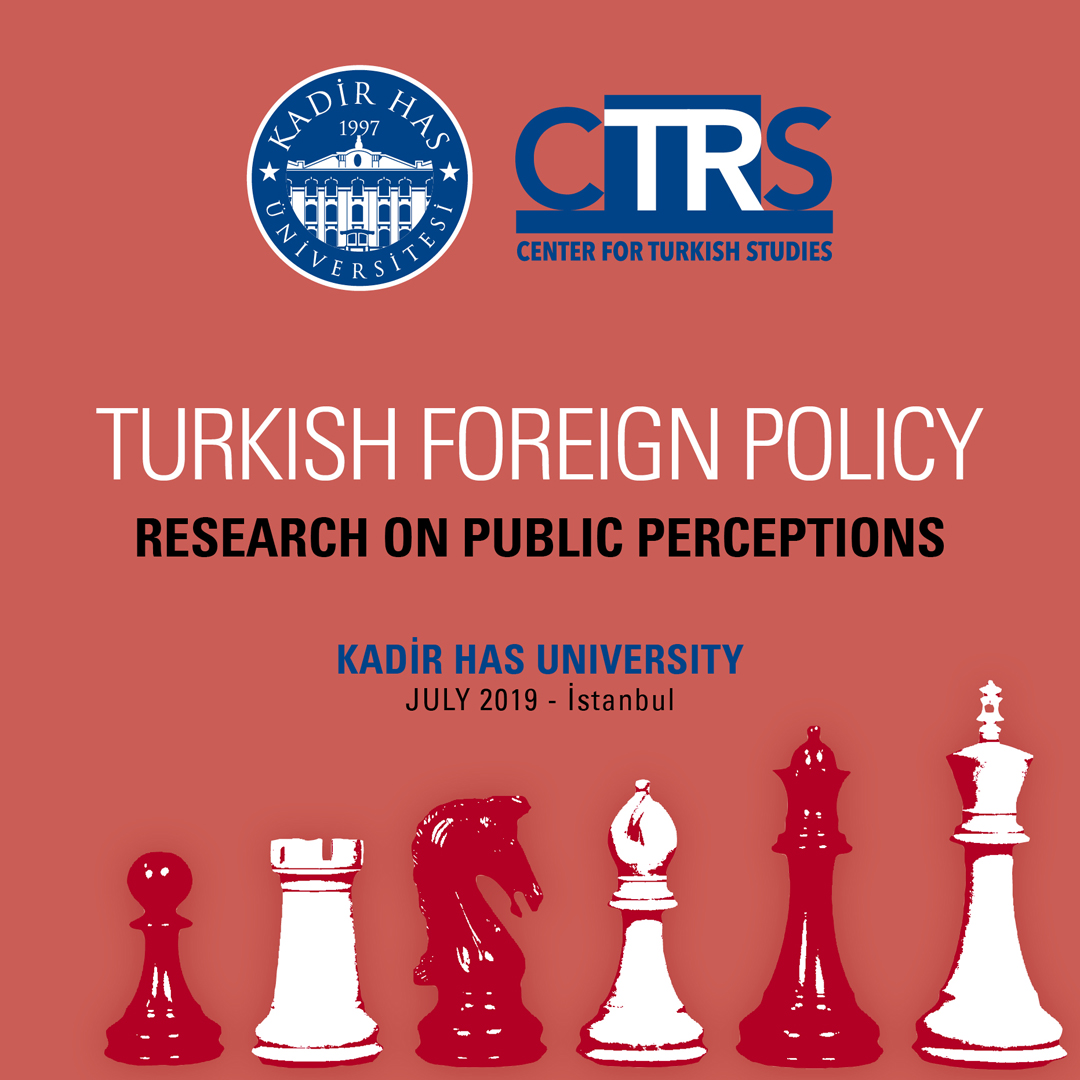 The Center for Turkish Studies at Kadir Has University announced the 2019 results of its annual “Public Perceptions on Turkish Foreign Policy” survey. According to the survey results, the Turkish public considers Azerbaijan as Turkey’s closest friend, whereas the relations with the United States have ranked as the most problematic issue for the Turkish foreign policy.

The survey, conducted by a team led by Prof. Mustafa Aydın from the International Relations Department of Kadir Has University, and comprised of Prof. Sinem Açıkmeşe, Prof. Mitat Çelikpala, Soli Özel, Dr. Cihan Dizdaroğlu and M. Gökcan Kösen, took place between 27 May-20 June 2019 through face to face interviews with a thousand respondents, representing Turkey’s population aged 18 and over, residing in the city centers of 26 cities. In the survey, public perceptions and preferences on various foreign policy issues were inquired
“RELATIONS WITH THE USA ARE THE MOST IMPORTANT ISSUE FOR TFP”
Within the scope of the survey, when asked “What is the most important issue for the current Turkish foreign policy?”, 20.6 percent of the respondents responded that it is the relations with the USA, while 18.3 percent responded as “Trans-border terrorism”. While the Syrian civil war was seen as the most important issue for Turkish foreign policy last year with 26 percent, it ranked third this year.
On the other hand, while the purchase of S-400 missiles from Russia appeared as the most important current issue for the tension in bilateral relations, the 44 percent of the respondents stated that the missiles should be purchased despite NATO’s objections and US threats of sanction. 24,9 percent were against the purchase.

“TURKEY IS AN ISLAMIC COUNTRY”
According to the survey, the statement of “Turkey is an Islamic country” has ranked as first with 46 percent of the respondents. In the same category, those who have defined Turkey as a European country was 17,6 percent while 16,3 percent defined Turkey as a Middle Eastern country. Finally, 28,5 percent< of the respondents have stated that “Turkey is a country with unique characteristics”.

“THE PRESIDENT DETERMINES TURKISH FOREIGN POLICY”
The Presidency is seen as the main decision maker and executive office for foreign policy. While 68,8 percent replied “the President” last year when asked “Who determines foreign policy in Turkey?”, this increased to 72,2 percent this year. On the other hand, when asked “which institution has the most impact on foreign policy?”, the Ministry of Foreign Affairs moved ahead of the Presidency with 62,9 percent of the respondents.

“POLITICAL RELATIONS SHOULD BE IMPROVED FORTIFIED FOR MORE EFFECTIVE FOREIGN POLICY”
Within the context of the survey, when asked “what line should be pursued for a more effective foreign policy?”, 62 percent responded with “improvement of the political relations with other countries”. Same response got 52,6 percent last year. Moreover, 33,9 percent of the respondents have highlighted that the economic relations with other countries should be utilized for better and more effective foreign policy.

“AZERBAIJAN IS ONCE MORE THE CLOSEST FRIEND; THE USA IS THE BIGGEST THREAT”
When asked to evaluate different countries whether they were Turkey’s friends, participants have indicated once again that Azerbaijan, with 65,3 percent<, is Turkey’s closest friend. Azerbaijan is followed by the Turkish Republic of Northern Cyprus and Central Asian Turkic states. On the other hand, while last year 60,2 percent of the respondents considered the USA as a biggest threat to Turkey, this year this percentage was found to be increased to 81,3 percent. The USA is closely followed by Israel as a country posing threat to Turkey with 70,8 percent.

“TURKEY WILL BE AN EU MEMBER IN 5-10 YEARS”
Another salient aspect of this year’s results is the increased public support for Turkey’s EU membership. When asked “Do you support Turkey’s membership to the EU?”, last year 55,1 percent had replied yes. This year, 61,1 percent have said yes to the same question. In the same category, 20,3 percent of the participants have anticipated 5-10 years for Turkey’s full membership. In the category which Turkey-EU relations are evaluated, 58,5 percent of the AKP voters, 73,7 percent of CHP voters and 60,2 percent of MHP voters support Turkey’s EU membership. The public opinion also shows its belief that neither Turkey nor the EU would end the membership negotiations soon, while 53 percent of the respondents believes that the negotiations should continue in any case.

“NATO MEMBERSHIP SHOULD CONTINUE”
While 60.8 percentb of the participants have stated that Turkey’s membership for NATO should continue, 50.3 percent think that the membership is beneficial for Turkey. Further, 69,6 percent considers that the main contribution of NATO to Turkey is that “it will come to Turkey’s aid in case of a possible attack”.

“THE MOST IMPORTANT PROBLEM BETWEEN TURKEY AND GREECE IS CYPRUS”
As the Turkish-Greek relations have tensed again recently, 30,3 percent of the respondents characterized Turkish-Greek relations as “problematic” and 55 percent think that disagreements over Cyprus are the biggest issue separating Turkey and Greece. This was followed by “militarization of the Aegean islands” with 53,8 percent. For the first time this year, unification of Northern Cyprus with Turkey appeared as the most preferred solution alternative to Cyprus problem with 41,7 percent, while 30,1 percent still supports bi-communal bi-zonal federal state as a solution.

“STRATEGIC PARTNERSHIP WITH RUSSIA”
When asked “How do you define the relations between Russia and Turkey?”, 26,1 percent of the respondents replied, “there is strategic partnership”. The most important cooperation area between Turkey and Russia is seen as energy with 34,3 percent, followed by trade and economic cooperation with 27,9 percent. However, none of the issue areas that were presented to respondents as important areas in bilateral relationship drew more than %50 percent of convergence.

“TURKEY DOES NOT TRUST IN THE USA”
To the question concerning Turkey-USA relations, 39,4 percent replied that the USA is an “unreliable country”, while 22,6 percent classified it as “colonialist country”. In the same category, when asked what is the most important issue between Turkey and the US, 60,6 percent have responded as differences in “fight against terrorism”, while 37,3 percent indicated to “US support to PYD” in Syria.

“TURKEY SHOULD BE NEUTRAL IN ITS SYRIAN POLICY”
42,1 percent of the respondents state that Turkey should pursue a hands-off policy towards Syria and should not intervene. 13,3 percent highlights that Turkey should only help refugees. By the same token, however, when asked about Turkey’s policy towards refugees, 57,6 percent prefers to end receiving refugees, and only 7 percent appear content with the existing Syrian refugees in Turkey.