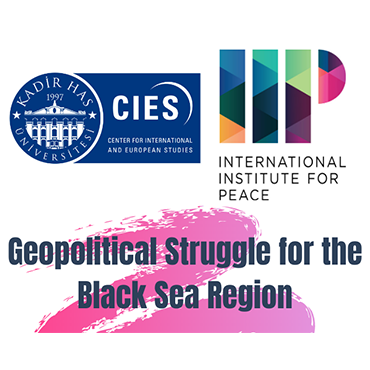 The Center for International and European Studies (CIES) at Kadir Has University and the Vienna-based International Institute for Peace announce the launch of an online discussion series titled “Geopolitical Struggle for the Black Sea Region”.

This online discussion series to be held in Spring 2021 will look at the transformations and strategic realignments of Black Sea countries along the lines of major regional conflicts and explore how to transform conflict into cooperation. Experts from the region’s countries will analyze the security situation in the South Caucasus, assess the status of the three frozen conflicts between Russia and its neighbors, and discuss the EU’s role in the region in at least three Webinars to be held in February, March, and May. A final debate will feature the perspective of an important ‘outsider’ – the United States – and its interests in the region.

The shores of the Black Sea bring together countries of diverse economic, political and cultural orientations. Bulgaria and Romania are EU and NATO members, while Turkey is a NATO member and a prominent actor in the Middle East. Russia is the biggest regional power with a strong military presence and political clout in the Black Sea, the Caucasus, the Middle East and Eastern Europe. Georgia, Moldova, and Ukraine have problematic relations with Russia, and they aspire for closer ties with the EU and NATO. Armenia and Azerbaijan are less ambitious with regard to the EU and look towards other regional actors, namely Russia and Turkey respectively. Considering these diverse and sometimes adversarial relations, does the Black sea unite or separate the countries on its coast and its wider regional context?

Historical and cultural ties among them, as well as economic interests make a great case for pursuing cooperation. Thus, the Black Sea Economic Cooperation was established in 1992 to foster such relations. Security relations among many states have been difficult and contentious, however. The Russo-Georgian war of 2008 was followed by the Russian annexation of Crimea in 2014. The second Nagorno-Karabakh war in Fall 2020 reshaped the balance of power in the Caucasus, enhancing Azerbaijani and Turkish standing, while weakening Armenia. While a ceasefire agreement has been reached, the conflict between these two neighbors is far from over and might escalate again, with repercussions for the Black Sea area. Three frozen conflicts are located on the Black Sea shores: the annexed Crimean Peninsula, Abkhazia, and Transnistria. Russia is the core player in all three aforementioned cases, and since 2014 it has been increasing its naval military presence in the region that is no longer limited by international arms control treaties, such as the Treaty on Conventional Armed Forces in Europe.

Turkey’s position has also been changing. While cooperation in the Black Sea has always been always beneficial for Ankara that also never questioned Russia’s hegemonic position, the war in Nagorno Karabakh enhanced Turkey’s standing. Turkey’s relationship with Russia has also been swaying between competition and cooperation. To showcase the latter, Ankara purchased S-400 missiles from Moscow, thereby defying its NATO allies. Worsening relations with other NATO and EU members are also changing Ankara’s calculations in the Black Sea region.

The EU’s presence in the region has been strong in economic terms. However, security-wise it has not had much traction. It was not a prominent actor in the Karabakh war, nor did it manage to reverse Russia’s aggression against Ukraine, either by imposing sanctions or by diplomatic boycott. The three ´countries in-between´ - Moldova, Ukraine and Georgia – seek to enhance military cooperation with the EU, not least as a means to counter Russian influence.