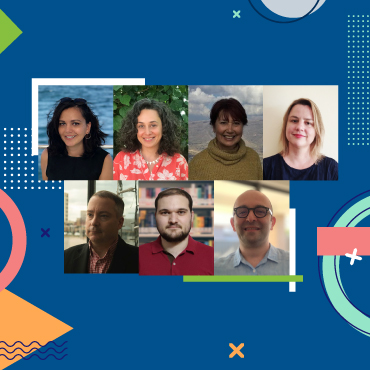 Kadir Has University Core Program (Department of Core Academics) strengthens its staff with new academics. We are delighted and proud to introduce our new colleagues.

Şenay Çınar completed her master's degree in Istanbul Bilgi University Comparative Literature Department with her thesis titled "A New Genre in Literature: Blogs" after receiving her BA degree from Boğaziçi University, Department of Philosophy. She worked as an editor in various magazines and books.

She continues her doctoral thesis on censorship in modern Turkish fiction at Boğaziçi University, Department of Turkish Language and Literature. Her academic interests include the relationship between literature and censorship, literature-archival discussions, and fictional texts outside of canon in Modern Turkish literature.

Selen Erdoğan received her BA in Political Science from Boğaziçi University and her MA in Cultural Studies from Sabancı University with a thesis titled “Writing with/in Irony: Sevgi Soysal’s Tante Rosa and Leyla Erbil’s Cüce,” which focuses on the relationship between irony and women writers’ subjectivity.

She is currently pursuing her Ph.D. degree at Boğaziçi University in the Turkish Language and Literature Department. Her doctoral work examines how Bilge Karasu’s fiction contributes to queer theory by transgressing the hetero-normative matrix and Karasu’s dialogue with significant works of modernism. She is particularly interested in the relationship between violence and writing in Bilge Karasu’s texts.

She spent the 2018-2019 academic year in the United States as a Fulbright Researcher at the University of Pennsylvania’s Comparative Literature Department. Between 2015 and 2021, she worked as a part-time lecturer at Sabancı University, where she taught Turkish literary modernism in English and Turkish. She published articles, essays, and book reviews in many journals, including New Perspectives on Turkey, JOTSA, Bir+Bir, Express, Notos, Yeniyazı, Altyazı, and Feminist Politika. She is broadly interested in modern Turkish literature, comparative modernisms, queer and feminist theory, and gender studies.

Dr. Gulnara Kenzhebulatova’s first academic degree is from Petropavlovsk Teacher Training Institute in Kazakhstan. Her M.Ed. in Higher Education Administration is from the University of Toledo, United States, and her PhD in Linguistics is from Moscow State Linguistic University.

Her current research focuses on the correlation between a speaker’s native tongue and non-verbal communicative behavior.

Paul Sweeney has several degrees in Philosophy, specializing in metaphysics, phenomenology, logic, and critical thinking. Before studying philosophy, Paul trained as an Emergency Medical Technician, working as an Ambulance Officer in Canada.

Paul has taught and lived in many countries-South Korea, Saudi Arabia, and Kazakhstan. In these schools, he has taught English, Critical Thinking, and Logic. Paul has traveled extensively in Asia and Europe, and the Middle East, having been to Indonesia, Thailand, Bahrain, Egypt, France, and several trips to Istanbul.

Paul enjoys hiking, paddling his kayak and canoe in the Canadian wilderness, and scuba diving in his free time.

Tayyip Topuz is graduated from Kadir Has University Computer Engineering Department with third place. His thesis titled "Geo-Social Case Analysis" was selected as the second-best project by his department.

After completing his bachelor's degree, he started his MSc in Computer Engineering at Kadir Has University. He continues working in the field of machine learning.

Dr. Anna Vakali holds a BA degree in Journalism and Mass Communication from the Aristotle University of Thessaloniki, Greece, and an MA degree from the Atatürk Institute for Modern Turkish History of Boğaziçi University.

She completed her doctoral degree in 2017 at the Near and Middle Eastern Studies of the University of Basel, Switzerland, with a thesis on Balkan proto-nationalists who were tried in the Ottoman courts of the Tanzimat. She has worked as a post-doctoral fellow at the Austrian Academy of Sciences and at the National and Kapodistrian University of Athens.

Her research interests cover the socio-legal history of the 19th-century Ottoman Balkans, non-Muslims in the Balkans, and Greek nationalism.

Amin Zargarian received his Master of Art in Applied Linguistics from the Faculty of Arts at the University of Adelaide in 2013. He also taught Academic English at the English Language Centre and the Professional and Continuing Education (PCE) in Adelaide. Before that, he worked at Kaplan International English, where he taught and trained students in preparation for university pathway programs, academic and general English, and Cambridge University exams’ preparation.

Amin has been teaching English in Australia and overseas for over seventeen years and has presented academic papers in various teaching, learning, and linguistics conferences. He is a recent award winner of English Australia’s Festival of Bright Ideas in Australia. Amin has published internationally, and his research interests include educational philosophy, pedagogy, lifelong learning, psychology in education, and topics in psychoanalysis, social sciences, and humanities. Amin has been a member of the Australian Systemic Functional Linguistics Association (ASFLA), where he drew most of his educational inspiration in completing his MA in Applied Linguistics.

He has also been involved with and contributed to the Arts community, particularly theatre and acting; he has acted in several theatrical plays, including Shakespeare’s Richard III, which won multiple awards from Theatre Association of South Australia, Adelaide Critics Circle Awards, and Adelaide Theatre Guide Curtain Call Awards in 2013.