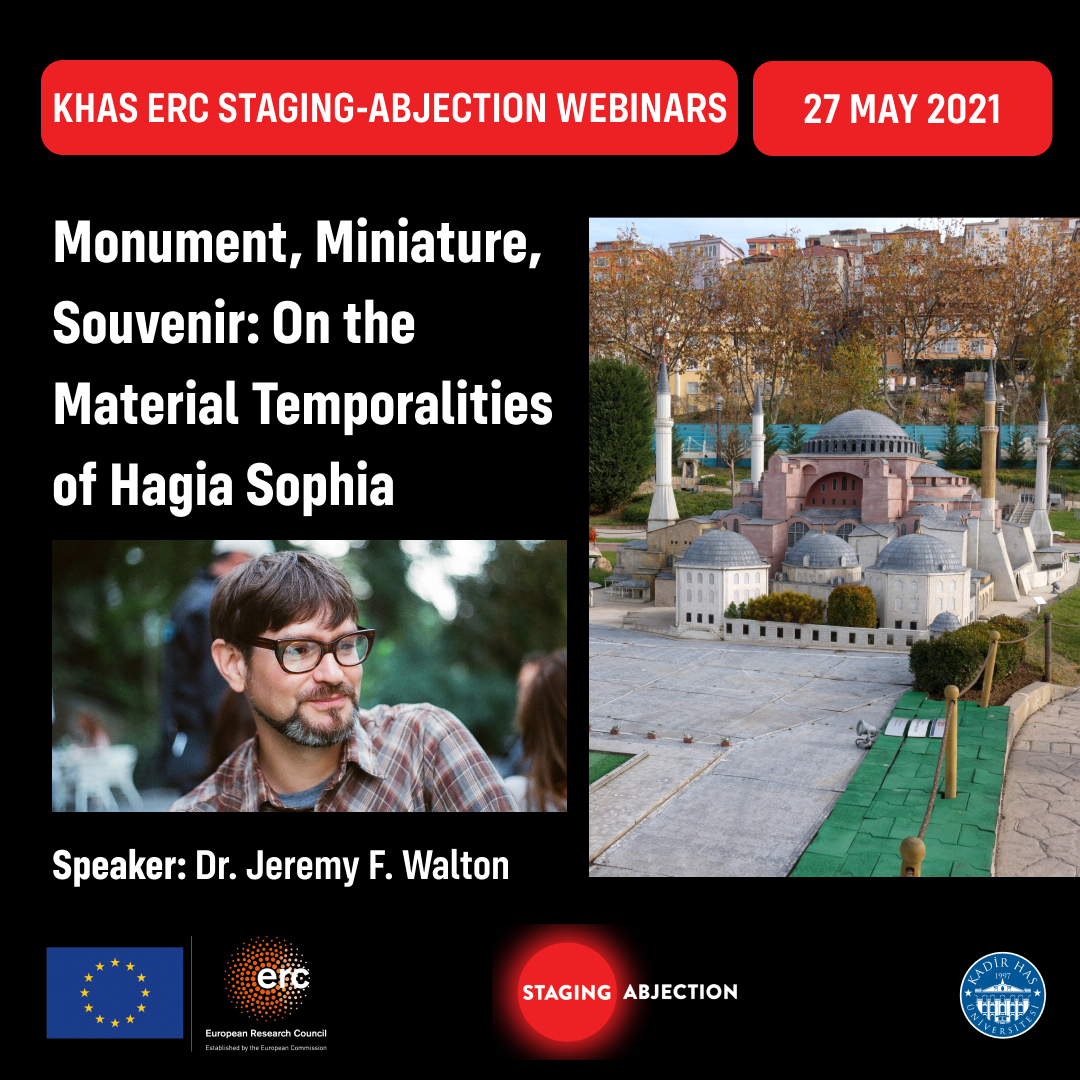 The webinar will be in English.

Please register in advance for this webinar:
https://us02web.zoom.us/webinar/register/WN_WV1ioIB8TPuC-Lhp2g_8yg

With the reconversion of Hagia Sophia from a museum to a mosque in July 2020, the field of politicized meanings surrounding the building and its history shifted yet again. Recent debates over Hagia Sophia’s status have pivoted on the dichotomy of the museum and the mosque as a clear expression of the ideological antinomy between secularism and Islamism in Turkey. In this presentation, Dr. Jeremy F. Walton pluralizes and complicates such dichotomies without ignoring the performative power of Neo-Ottomanism in relation to Hagia Sophia more generally. By drawing on Susan Stewart’s (1992 [1984]) trenchant analysis of the gigantic, the miniature, the souvenir, and the collection, he delineates the multiple semiotic modalities that Hagia Sophia inhabits, and might inhabit. To begin, he conceptualizes the reconversion of Hagia Sophia into Aya Sofya-i Kebir Mosque as a performance of gigantism and monumentalism in Stewart’s sense, in tandem with the broader monumental infrastructural politics of the AKP. He then examines the miniatures of Hagia Sophia located in two theme parks, Istanbul’s Miniaturk and Beijing’s The World. In this context, Dr. Walton focuses especially on the distinct collections of miniatures assembled by the two theme parks and Hagia Sophia’s place within each of these assemblages. Finally, he concludes with a speculative contrast between two souvenirs of Hagia Sophia: a coin that commemorates its recent reconversion, and an antique photo album that potentially enunciates other, subaltern pasts.

Dr. Jeremy F. Walton is a cultural anthropologist whose research resides at the intersection of memory studies, urban studies, the comparative study of empires and imperialism, and critical perspectives on materiality. He leads the Max Planck Research Group, “Empires of Memory: The Cultural Politics of Historicity in Former Habsburg and Ottoman Cities,” at the Max Planck Institute for the Study of Religious and Ethnic Diversity. Dr. Walton received his Ph.D. in Anthropology from the University of Chicago in 2009. His first book, Muslim Civil Society and the Politics of Religious Freedom in Turkey (Oxford University Press, 2017), is an ethnography of Muslim NGOs, state institutions, and secularism in contemporary Turkey. He has previously held fellowships at the University of Rijeka, Georg August University of Göttingen, Georgetown University, and New York University. Dr. Walton has published his research in a broad selection of scholarly journals, including American Ethnologist, Sociology of Islam, Die Welt Des Islams and History and Anthropology. He is also the co-editor of several volumes, including Anthropology and Global Counterinsurgency (University of Chicago Press, 2010) and Art and Politics in the Modern Period (University of Zagreb Faculty of Humanities and Social Sciences, 2019). “Empires of Memory,” which Dr. Walton designed, is an interdisciplinary, multi-sited project on post-imperial memory in post-Habsburg and post-Ottoman realms. In early 2022, he will inaugurate a new research group, “REVENANT-Revivals of Empire: Nostalgia, Amnesia, Tribulation” at the University of Rijeka (Croatia), with support from a European Research Council Consolidator Grant (#101002908).

Staging National Abjection: Theater and Politics in Turkey and Its Diasporas ● stagingabjection.com