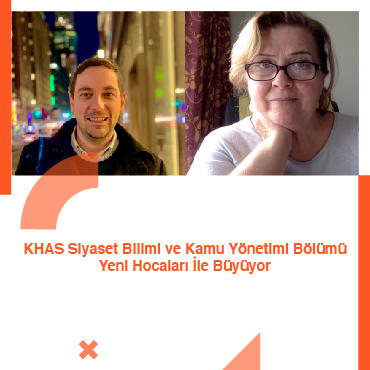 Kadir Has University Department of Political Science and Public Administration continues to grow by welcoming Prof. Dr. Dilek Cindoğlu and Asst. Prof. Dr. Kerem Yıldırım within our academic staff. We are proud and happy to introduce our new colleagues to you.

Prof. Dr. Dilek Cindoğlu received her B.A. and M.A. degrees from Bogazici University and further received her PhD in Sociology at SUNY Buffalo University in New York. Cindoğlu, who has been lecturing part-time at İzmir Institute of Technology, served as a faculty member of Bilkent University Department of Political Science between 1991-2012, as the Dean of Faculty of Humanities and Social Sciences at Abdullah Gül University between 2015-2018, and as the Head of Sociology Department, Vice Rector and Deputy Dean at Mardin Artuklu University between 2012-2015. Cindoğlu, who was the former director of the Department of Middle Eastern Studies at Hamad Bin Khalifa University, has published articles in the fields of political participation, immigration, health and gender in various internationally recognized journals and in book chapters. She was a Fulbright scholar at the University of Wisconsin between 1998-1999. She participated as an advisor in many projects supported by national (TÜBİTAK, KSSGM, AAK) and international (IDRC, Ford Foundation, World Bank, ILO, European Union) funds; her articles have been published in national and international academic journals. She continued her research studies at St. Antony’s College, Oxford University in 2002, at New York University in 2003 and at Columbia University between 2010-2011. Already participating in science committees of many academic journals, Prof. Cindoğlu was elected as the member of the board of directors of Sociological Association of Turkey between 2008-2014, International Sociological Association (ISA) between 2010-2018, and the European Sociological Association (ESA) between 2018-2020.

Asst. Prof. Dr. Kerem Yıldırım received his B.S. in Global Politics and International Relations from METU-Binghamton dual diploma program (2009) and his M.S. degree from the Middle East Politics program in SOAS (2010). He received his PhD from Koç University (2016). He conducted further studies as a Postdoctoral Associate at Duke University (2019-2020) and a visiting assistant professor at Sabancı University (2017-2019). Contributed to many international publications with his articles and book chapters, Yıldırım is the lead author of the article entitled “Dynamics of Campaign Reporting and Press-Party Parallelism: Rise of Competitive Authoritarianism and the Media System in Turkey” published in 2020 in Political Communication journal which has the highest impact value in the field of Political Science. Kerem Yıldırım's main research topics include relations between political parties and voters, political competition and behavior, and political communication. He still conducts surveys with experts from many countries around the world within the scope of the project named Democratic Transparency and Leader-Voter Relationship Program (DALP) and tries to reveal how political parties construct different types of relations. He is also the executive of another project on transparency in local governments. In this project he aims to create the most comprehensive original data set on annual budgets of county municipalities in Turkey in order to reveal the transparency of the local budgets.