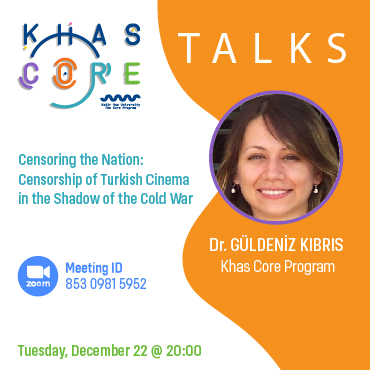 Censoring the Nation: Censorship of Turkish Cinema in the Shadow of the Cold War

This paper analyzes Turkish film censorship between 1936 and the early 1970s. The period includes the Second World War, Turkey’s transition to multiparty system, industrialization, rural to urban migration, and two military interventions: one in 1960, the second one in 1971. The 1950s and 1970s, at the same time, coincided with the Golden Age of Turkish cinema leading to an enormous production and consumption. During the period under examination, Turkish cinema was a significant area to understand the formation of Turkish nationhood in relation to market demands and state interventions in the form of censorship. Relying on censorship reports prepared by the Central Film Control Committee, this paper reveals that censorship was a powerful tool of the state to design the boundaries of Turkishness through a homogeneous and standard imagining of the Turkish national identity as opposed to heterogeneity which made different national imaginings possible. The paper also argues that these reports were never independent, in fact were the products of the dominant ideological codes of the Turkish political culture. In this regard, although the Committee was a domestic institution, it never worked independent from foreign policy. Thus, the paper also analyzes how the implications of the Commission’s criteria changed over time under the influence of gradually increasing aggressiveness and militarism in the country as a response to foreign policy concerns.