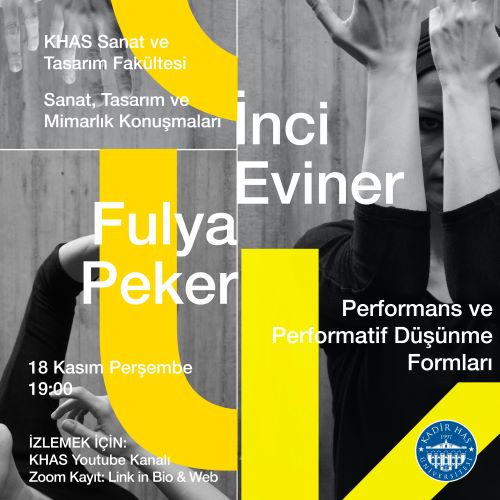 Fulya Peker has a very unique place not only with her performance works, but also with the translations and performances she staged. The concepts of performance, performance recordings, performative thinking and Peker's relationship with space, time, movement and body politics as a performance artist will form the content of this conversation. The relations between Peker's personality as an educator and her independent work as an artist and her interaction with other disciplines will be discussed.

The event can be followed on zoom and will be broadcast live on Khas Youtube channel. The language of this event will be in Turkish.

Title: Performance and the Forms of Performative Thinking

Fulya Peker is a theater/performance artist and trainer working in New York and Istanbul. She has performed in projects of well-known names such as Richard Foreman, John Zorn, Robert Ashley, Katsura Kan, David Michalek and Object Collection in the field of experimental theater, which focuses on physical and vocal studies in New York. Peker continues her experimental theater studies with the Katharsis Performance Project, of which she is the founder and artistic director, and her interdisciplinary performance research with the Modern Mythologies Project, of which she is the founder. Bachelor of Theater (H.U. Ankara State Conservatory); having completed her MA in Theatre, History, Literature and Criticism (Brooklyn College/CUNY). Peker still teaches Directing and Experimental Theater at Istanbul Bilgi University Faculty of Communication.

İnci Eviner received prizes from the Sharjah Art Biennial in 2017 (13 Prize); she was also invited to artist residencies such as Rauschenberg Foundation in Florida, Headlands Center for the Arts in California and ISPC in New York USA; SAM Art Projects in Paris and MAC/VAL Musée d’Art Contemporain du Val-de-Marne in France. One of Eviner’s most important exhibitions were,Venice Bienalle,Turkey Pavillion 2019 and  her retrospective “Who’s Inside You?” at Istanbul Modern Museum, Turkey (2016). She also displayed her works in important solo exhibitions such as “Beneath the Horizon” at Galeri Nev Istanbul (2017); “Runaway Girls” at The Drawing Center New York, USA (2015); “Broken Manifestos” at Musée d'Art Moderne de la Ville de Paris, France (2011); “Harem” at Art in the Auditorium in Whitechapel Gallery London, UK (2009). Eviner also attended a number of biennials worldwide including the Liverpool Biennial (2018), Gwangju Biennial (2018) and 13th Istanbul Biennial (2013). The artist’s works are included in globally important institutional collections such as Deutsche Bank Collection, Center Pompidou in Paris, Istanbul Modern Museum, Guggenheim and TBA21 Wien. Eviner is also a lecturer at Kadir Has University, Faculty of Art and Design. She lives and works in Istanbul, Turkey.