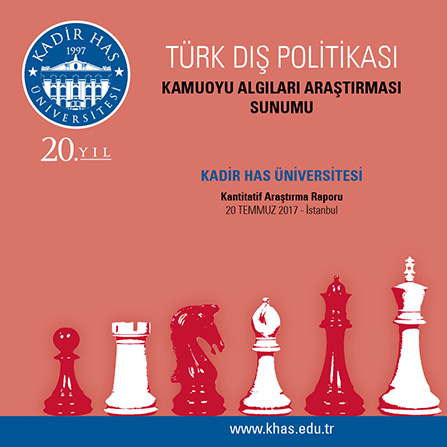 The research supervised by Professor Mustafa Aydın, the Rector of Kadir Has University, and coordinated by Professor Sinem Akgül Açıkmeşe from the Department of International Relations at Kadir Has University, involved face-to-face interviews with 1.000 adult participants. Conducted in 26 provinces that are representative of Turkey’s demographics, the survey has revealed that terrorism is increasingly percieved as a ‘foreign policy problem’. This outcome is an indication that the Turkish people define terror not just as domestic issue, but also as a foreign policy problem.

44,2% of the survey participants believe that ‘terror’ is the biggest problem of Turkey in its foreign policy, followed by the Syrian conflict (24,6%) and the ‘relations with Israel’ (8,3%). Relations with Russia is not even considered as a foreign policy problem, whereas it ranked as the fourth most important issue in 2016 with a percentage of 11,7%.

38,5% of the public considers Turkey’s foreign policy successful with an increase of 4,5% when compared to the results of the 2016 survey. Nevertheless, 51.7% of the survey participants think that the failed coup attempt of 15 July 2016 had a negative impact on Turkish foreign policy; and the 42.7% stated that measures taken during the state of emergency has harmed Turkey’s image in foreign policy.

AZERBAIJAN IS THE CLOSEST FRIEND, USA IS THE BIGGEST THREAT

When asked ‘which country is Turkey’s closest friend?’, the participants once more ranked Azerbaijan first, with a 12% increase from last year. In 2016, 59.3% defined Azerbaijan as the ‘closest friend’ while 71.3% agrees on the amity between Azerbaijan and Turkey. The percentage of those who think that ‘Turkey has allies’ has decreased from 23.1% to 17.2% in 2017.

IS TURKEY AN ISLAMIC COUNTRY OR A EUROPEAN COUNTRY?

The research has shown that those who identify Turkey as an Islamic country is at 39.9%. Those define Turkey as a European country, however, has been steadily increasing every year. While 26.4% of the participants said ‘Turkey is a European country’ in 2015, this percentage increased to 31.8% in 2016 and to 32.7% in 2017. The number of those say that ‘Turkey is a Middle Eastern country’ fell by 3 points, to 23%.

When asked ‘Which policy Turkey should adopt towards Syria?’, 49.9% of the participants said that ‘it should remain neutral, and not intervene at all.’ Half of the public thinks that Turkey should remain neutral in Syria. 54,5% voiced their discontent with Syrian immigrants, while 17,5% stated that they were content. 46,4% of the participants believe that immigrant intake should be stopped.

HOPES OF A TURKISH MEMBERSHIP TO EU IS DECREASING

Another significant conclusion of the research is that Turkish public support to the EU accession process has been decreasing over the years. Current support for the EU membership was marked at 48,4%. 81,3% of the public carries the opinion that membership to the EU will never occur. However, the support for an alternative model for Turkey-EU relations other than membership was measured at 30,4%. Those consider strategic cooperation with Russia as an alternative to the EU membership has increased to 27,6% from 14,8%. Despite all these negative indicators, majority believes that neither Turkey nor the EU will abandon the accession talks anytime soon. A 70%  thinks that the EU will not terminate the negotiations, while a 73.7% believes that Turkey will not stop this process.