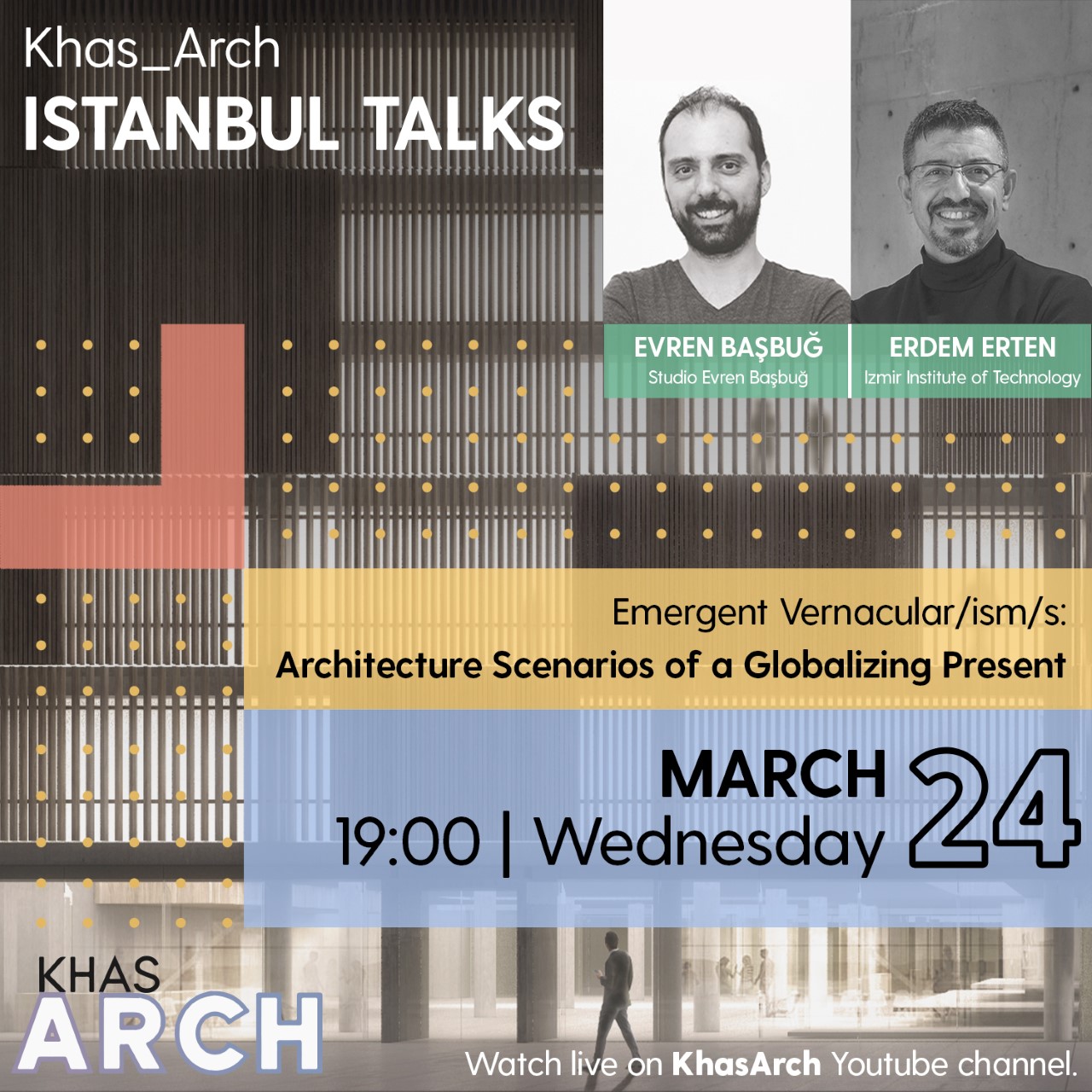 In the first of our 2021 Spring “Istanbul Talks” series, Evren Başbuğ (STUDIO EVREN BAŞBUĞ) and Erdem Erten (İYTE Department of Architecture) will discuss possible new venues for a creative collaboration between architectural theory and practice in Turkey through their curatorial proposal for the 2020 National Pavilion of Turkey at the Venice Biennale, which was shortlisted for the final.

The talk will be moderated by Kıvanç Kılınç from KHAS Architecture Department and will be broadcast live on KhasArch Youtube channel.

Erdem Erten is Professor at the Department of Architecture at Izmir Institute of Technology (İYTE). He received his BArch at METU and completed his PhD at MIT School of Architecture and Planning's History Theory and Criticism program. His research interests include the theorization of culture and its impact on modern architecture and urban design in the post-war period, architectural journalism, the problem of the avant-garde in architecture and romanticism, vernacular architecture and architectural historiography. Erdem is the editor of Alternative Visions of Post-war Reconstruction: Creating the Modern Townscape (2015) and has published extensively in international academic journals. He is currently the chairman of the executive board of 4T Design and Design History Society.

Evren Başbuğ is the founder and the creative director of STUDIO EVREN BAŞBUĞ. He received his BArch at METU (2003) and MArch at Bilgi University (2009). He has won over 20 awards (including 4 first prizes) in national architectural competitions. He, along with many of his works have been nominated or commended multiple times by national and international award programs including the World Architecture Festival (WAF). Başbuğ was among the 14 young architects selected for the Young Architects Selection & Exhibition (GEMSS) organized by The Circle. In 2018 he was given the prestigious National Architecture Award in the 'Buildings/Public Space' category with the Bostanlı Footbridge & Sunset Lounge. Başbuğ is currently teaching as a part-time studio instructor at TED university and Ankara Medipol University. He is the coordinator of Archiprix Turkey, and a member of the Architects’ Professional Committee in the İzmir Chamber of Commerce.