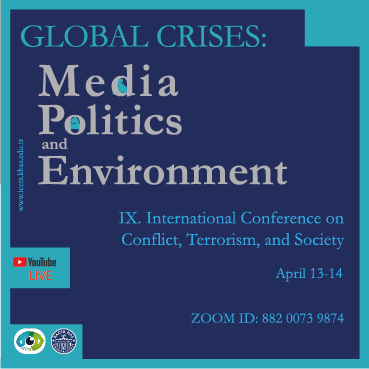 The 9th International Conference on Conflict, Terrorism, and Society (ICCTS 2021) was held online on April 13-14. This annual conference is hosted by Kadir Has University Department of Public Relations and Information every April. The conference has hosted more than 300 participants from 30 countries so far and this year, the theme of the conference was determined as "Global Crises: Media, Politics, and Environment". Motivated by the main theme of the conference, global crises and their roles in social, political, cultural, institutional, economic, technological, and environmental contexts were discussed. The main themes discussed included crises in healthcare, wars and terrorism, mass migration, legitimacy crises, economic crises, environmental disasters and risks, poverty, politics, security, the role of media during crises, misinformation, and power relations. To understand the ongoing multidimensional crises of the global world and to provide interdisciplinary approaches towards present global crises, analyses were made on how these global crises emerged, how they shape our times, and how they are represented in the media.

On the first day of the conference on April 13, Prof. Dr. Banu Baybars, Chair of Kadir Has University Public Relations and Information Department, and Assoc. Prof. Levent Sosyal, Vice Dean of Communication Faculty made the opening speeches. Prof. Baybars said that this year's theme defined as "Global Crises: Media, Politics, and Environment" was consistent with earlier themes and she stressed this conference series gave academicians the opportunity to suggest solutions for problems in both media and politics.

The discussion of the first session titled "Climate Change as a Global Crisis" included the effects of emergencies due to climate change on environmental security problems, security problems caused by climate change, and what is imposed by this change shouldn't be seen as conflicts, and should be addressed as a way for reconciliation. In the second session titled "Focusing on Social Networks and Politics", discussion topics were the reflections of terrorist attacks on social media, the impact of the social media platforms on political decisions from the users' viewpoints, the digitalization of managing political campaigns, and the use of social networks in the communication management of institutional crises. The third session was called "Security and Securitization". In this session, the political rhetoric of AKP was analyzed in terms of crises and performance, and a comparative case study about human trafficking in Southwest Asia was elaborated with a feminist view.

MIDDLE EAST IN THE US MEDIA FRAMEWORK

In his speech titled "US Media Framing of Conflict in the Middle East: Human and Environmental Consequences", Prof. Artz outlined the media outlets' framework on military interventions and military occupations of the US in Iraq, Afghanistan, Syria, and the Middle East. "For the US media, the underlying reason for each US attack is to fight terrorism. And any civil resistance to the US occupation is also highlighted as terrorism," said Artz and expressed that the news on media legitimated the military actions, ignored the humanitarian and environmental costs paid by the residents of occupied regions, and trifled the numbers of people who died: "This media which legitimates the interventions has no report on the destruction of clean water resources or the devastation of resources that could provide environmental sustainability, thus totally missing out the environmental results of the war."

CRISIS IN THE CONTEXT OF POLITICAL ECONOMY, MEDIA, AND COMMUNICATION

On the second day of the conference, two different sessions were held under the title "Crisis in the Context of Political Economy, Media, and Communication". In the first session, analyses were made for new media literacy in the Eastern Partnership (EaP) region through case studies of Azerbaijan and Ukraine, the political economy of Turkey's city hospitals, and the nationalistic discourse in Indian media. The last session shed light on how "Yellow Vests" protests were represented in French media, the existential crisis faced by the Syriac in the Middle East, and terrorism as "a media event".

As before, this year's selected conference papers will be collected into a book. For more information, please visit iccts.khas.edu.tr. You can watch the video recordings of some sessions on Kadir Has University's YouTube channel.