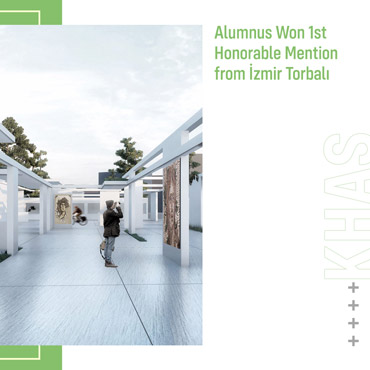 İpek Üstündağ, alumnus of Department of Architecture from our school and her teams is awarded with 1st Honorable Mention at the Torbalı Municipality Building Marketplace and Car Park and Its Close Area National Architectural Project Competition.

In the competition, for the creation of a new city center in Torbalı district of Izmir; With Torbalı Municipality Service Building, it is aimed to obtain versatile, original and functional projects that will meet the need for indoor parking, and also include the district market one day a week and a city square six days a week.

We would like to congratulate our alumnus and her team!

ARCHITECTURAL REPORT
THE WALL
"... There is a wall between you and me. I see you, I talk to you, but you are on the other side." Jean Paul Sartre, The Wall

Walls that we follow on a road can also have directional qualities like roads. The walls of the buildings form a backing for the activities and events taking place and the markets established. It brings importance and definition to the street. So instead of leaving the market floating in the square, we defined it, divided it into streets and sections. As an urban element, we created a square where the "wall" assumes all its responsibilities and reveals all its functions. We included the marketplace who opened a stall under the wall and people from all over the city.

We wanted them to lean against the wall, to sit on it, to have the birds set, to have an exhibition another day, for the people to walk, even if there was no event, to not pass by, wander. While filling the gaps in the square, we tried to establish the balance of occupancy and emptiness, green park and hard ground, keeping this definition in mind, without forgetting the definition of the concept of the square. It has been designed by keeping the structure and functioning of the "traditional shopping place", the neighborhood markets, away from the shopping mall logic as much as possible, and considering the communication between visitors and buyers and sellers. The walls, which provide orientation without breaking the communication throughout, function as a sign element in this large area. Settles into memory in exploring the market and the marketplace and keeping in mind. It gives confidence. With its light cover system and the walls it creates, it reflects a confrontation between the old and the new.

The eaves, which form a fiction from light frames with their open form, become closable when there is a market. During the market, top covers provide protection from vertical climatic events such as snow and rain, while vertical walls guide and lighten the wind.

SOCIAL MUNICIPALISM
Across the square, the municipality building blends into the nature of Izmir with its attitude that fits the flow, its whiteness, simplicity and lightness, as if referring to the comfortable, calm, unique urban life in Izmir. On the ground floor, we have planned joint programs in which the citizens can be more involved, leaving spaces with wide spaces where the social axis coming from the square, exhibitions and activities can continue. We aimed to integrate the square into a socially sustainable city part that is accessible, transparent, diversifies the purpose of use with units, is compatible with its cultural background, forms a part of the daily life of the people such as Café, Amphitheater, Courtyard, and Exhibition space. The municipality establishes its connection with the ground through the main atrium. The main atrium describes a 3-dimensional volume with the functions of counters, entrance, lobby, and waiting. The courtyards created under the ground level create a multi-layered interaction area that increases the visual theme of different functional units, while allowing spaces to take in natural light and air. Likewise, the façade that we designed as a double-skinned façade creates more comfortable units of office spaces by taking natural light and air to all units and breaking the light coming from the west as much as possible. Wide gallery spaces on each floor bring the municipality structure closer to the concept of a transparent and social municipality, while allowing a spacious interior design. The connections of the designed building with the city are shaped on the axes that are used the most by the public, and the pedestrian axis extending from the municipality has become the main backbone for the circulation of the square between the guides. With its square, which is an important node for Torbalı, the social municipality structure is based on the duty of responding to the needs of the city dwellers and guiding the development of the city by having a positive impact.