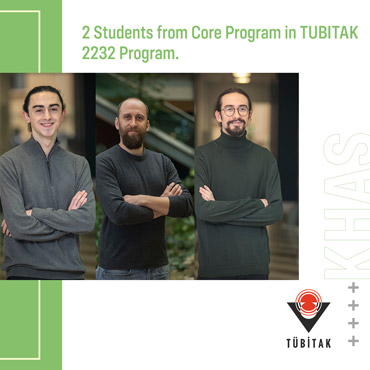 Dr. Faculty Member Deniz Eroğlu and his research team try to uncover the structure in the brain by transforming brain EEG signals into mathematical models through combination of data science and mathematics in this project. Saying that they try to make predictions for the future by using the formulas in this model, Dr. Faculty Member Eroğlu indicates that they try to understand how close it is for a patient to have an attack and when the patient in question can have an attack in the exemplary case of an epilepsy patient in this study.

Dr. Faculty Member Eroğlu tells the story about the inclusion of Core Program students Ayberk Ayhan and Murat Akın Çiçek into the project as follows: “These two students made me feel the significance of the interdisciplinary study, which is the most important and strongest feature of the Nodds group we created in our university, during their presentations in KHAS 101 and 102 courses in the Core Program. Also, I learned that they were successful in the programming/algorithm courses from their instructors in these courses as part of the Core Program. So, I had a talk with the students asking if they’re interested in machine learning or not and invited them to the group. I think that both of them will be researchers who know all the data sciences related points in our project very well. Besides, they go through a quite exclusive mathematical education every week under my control along with the scientific support they receive from the group members.”

Core Program student Ayberk Ayhan says that being in a research group was one of his primary goals when he started the university. He states that when he was accepted and became a part of this group, it made him feel very excited about achieving this goal in the very first year and starting to shape his future. Saying that “Even though I’m at the beginning of this process, I'm looking forward to working with great devotion and therefore, improving myself”, Ayhan explains that Core Program is the main reason for him to be elected for this project via following words: “I think that one of the underlying reasons for Mr. Deniz to ask me if I want to join the Nodds group is that he saw our interests and abilities thanks to the course we completed in the Core Program. Also, I can say that adapting to the dynamics within the project group got easier thanks to the introductory courses we took for programming language within this year.”

The other student elected for the project, Murat Akın Çiçek also has the opinion that Core Program had great contribution for his inclusion into the project. Çiçek explains the process as follows: “The studies I have done since first semester in the Core Program courses led my participation in this project. After making the final presentation in the ‘Scientific Discoveries and Engineering’ course, Mr. Deniz asked me in which field I want to study. Once I told him about my interests, I asked him if he has any suggestion, and he invited me to his own research group. I’d also like to add that one of the best things that Core Program provided for me is to improve the abilities of doing research and solving problems. As a consequence, a person is naturally more curious and eager to study, which I think is necessary for this type of project.”